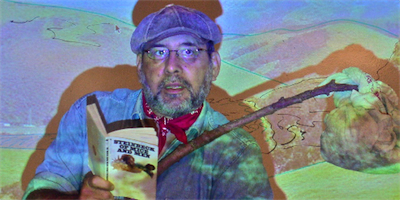 What is a Google Lit Trip?

It is actually a bit difficult to “show” what Lit Trips do without a guided tour, the below video is an example. This video is only visual representations since the best way to use a Google Lit Trip is to manually travel through it moving at a pace that matches the reading of a book or the discussions and integration of the associated activities and resources.

From where do you draw professional inspiration? How do you stay connected and grow as an educator?

There are both a short and a long answer to these questions… I’ll try to stick closer to the shorter end.

Truthfully? The entire project is a sort of “paying it forward” act of gratitude to Mr. Ferdie Kay, my senior English teacher in high school. I was not a great student, not because I wasn’t smart, in fact it was a pretty consistent experience for me that most years soon after the standardized testing results came in that I was called in to the counselor’s office for my annual “pep talk” about how my grades didn’t really reflect my intelligence as measured by those tests. I was pretty “otherwise focused” in those days and wasn’t really as concerned about my grades as I was about being popular. But, somehow Mr. Kay managed to find a way to engage me in wanting to learn. How? He took our class to see Bob Dylan in Berkeley in 1966 (a pivotal concert in Dylan’s career). And, I’ll be darned if within a week after that he’d cleverly built a bridge that made sense to me BACK to T.S. Elliot. He started from where WE WERE and connected our lives to the great poets that I hadn’t given a darn about previously. It was like magic to me. I wound up dedicating my entire teaching career to trying to be for my students what Mr. Kay had been for me.

So when the idea for GLT came to me some 37 years after high school and I was contemplating how I could continue to contribute to the profession my only thought was to “gift” to education my little project to teachers still in the trenches doing the good work. That’s why I’ve dedicated myself to providing everything to the end user without any cost. It’s simply my gift to the profession and my way of continuing to honor Mr. Kay’s gift to me and to the many hundreds of others like me who he managed to inspire with his gift of caring.

I’ve of course been inspired by many others since including my relationships with both the Apple Distinguished Educators and the Google Certified Teachers groups. I even include Ansel Adams, the great photographer with whom I spent one week in Yosemite. Ansel told me that he hoped that he would be remembered as a great teacher even more than as a great photographer because he believed that teachers do far more important work than photographers do. I always remembered his advice when he told me to, “remember, every single one of your students is ready to take a next step.”

How do I stay connected and grow as an educator? The shortest answer is that I’ve always simply cherished the rewards of curiosity. I like to keep my ears open. I realize that keeping up with everything new in technology has become absolutely impossible so I tune in to the conversations but don’t necessarily think that I’ve got to be on every cutting edge all the time, though I do like to keep my peripheral vision/hearing focused on as much of what is happening at the cutting edges as possible. I tweet a little, and PLN a little, and Facebook a little and explore a lot. I’m no longer the first one to dive into the deep end of a new technology, but I do stay tuned as others discover their deeper potentials.

What skill(s) do you feel are most important for today’s students to explore in academic settings (tech or non-tech related)?

First, though I do feel strongly that both educators and students ought to be held accountable for the quality and effectiveness of the work they do. At the same time, I also have serious concerns about the degree to which either the quality or the effectiveness of educators and students are measured by standardized testing processes currently in place, not only because there is too large of a margin of error for my taste leading to overly simplistic conclusions, but also that they seem to inevitably lead to overly simplistic, often counter-productive attempts to be solutions to 21st century global education issues.

I even have a bit of a concern over identifying the goals of education with the word “Skill(s).” For some skills such as math skills, though they can be extremely complex, are easier to determine proficiency levels. One can either “do math” (or perhaps more importantly, use a calculator) correctly or not. Whereas, in my particular area of Language Arts, the skills of spelling, grammar, and basic literacy are easier to measure with some degree of accuracy than the “skills” associated with appreciating the value of being well-read.

That being said…I’d begin a list of targeted outcomes of a truly effective education to include
(yes, the basics of being able to accurately get correct information regarding spelling, math, history, science, etc.)