A few years ago most of us had never heard of social media managers, market research data miners or app developers. What will be the employment opportunities for recent grads in 2025? One new career for recent economics grads might be a virtual world economist.

Gaming and social networks are a global industry. Many systems allow participants to buy, sell, and trade in native currency that can be purchased with real-world money (Habbo Hotel credits, Facebook credits, Wii points, etc). How will real-world currency fluctuations affect virtual-world currencies? The 2012 Partners In Learning US Forum culminated last night at an awards ceremony where 16 educators were chosen to represent the United States in Prague.

This 3-day event, held at Microsoft’s Redmond campus, was a combination of professional development, competition and networking. 102 educators were selected and joined by 30 judges (including Steven Anderson, Leslie Conery, Vicki Davis, Yohance Maqubela) to be challenged and inspired by Alan November, Jurec Klepic, Angela Maiers and each other’s passion and experiences.

Congratulations to all participants, I was honored to be a part of the group. 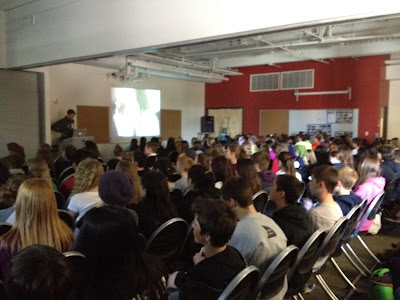 RUNNER is a spoken-word video collage from the Catlin-Gabel school. Created by Daniel Linnell and Max Fogelstrom, with words by Mo Alan.

Cats & Cats Return is a blend of editing and production techniques set to a catchy tune. Created by Spencer Shaw of Puget Sound Community School. We are currently preparing students for jobs and technologies that don’t yet exist . . . in
order to solve problems we don’t even know are problems yet.

In pondering the Fisch & McLeod’s quote from Shift Happens 2.0, I can’t help but imagine what these jobs will be. While social science fiction focuses on the more glamorous possibilities, the reality is many employment opportunities will be rather pedestrian – back in 1990, a full-time job as a bulletin board moderator seemed futuristic.

Assuming capitalism & consumerism march onward, we still have electricity, and everything that can be outsourced will be, what are opportunities for recent grad employment?

The boss can use a surrogate’s interactive devices to do what he or she wants to online…without the search terms, frequented sites and online interactions being traced back to their own name. A candidate for governor could sit on a tourbus watching honey badger videos all day on a surrogate computer while other staff members use the candidate’s devices & accounts to post video/micro-blog/photo updates and visit pertinent “grown-up” sites (legal, federal, news-based, political, etc).

Physical surrogates will be preferable to tech-based cloaking systems because there will be someone to take the blame for illegal data downloads or questionably moral activity. Surrogate contracts will include non-disclosure agreements and enormous legal penalties for violation.

Help wanted: Love to travel? Looking to get paid just for showing up?

Please note: you will be required to sign a non-disclosure agreement prior to interview.

Looking forward to working with parents in West Seattle this week as they gather to discuss the joys and challenges of raising digital natives. It is always exciting to bring educators and families together to talk as a team about how to best support the fluidity with which youth move between the real and digital worlds.

The flyer for this event is posted after the jump…

END_OF_DOCUMENT_TOKEN_TO_BE_REPLACED

Kudos to the Auburn School Department:

Articles and blog posts around the web have headlines that suggest that the iPad is improving Maine’s literacy scores. These articles reference a Feb 15, 2012 Press Release from the Auburn School Department titled Kindergarten iPad Program sees Positive Results. This press release, in turn, references a Research Summary titled Emerging Results From The Nation’s First Kindergarten Implementation of iPad.

The Research Summary presents some early findings from a 1-to-1 Kindergarten iPad implementation. Out of 10 literacy tests, one shows a statistical increase in the literacy scores of iPad-equipped classes as compared to non-iPad-equipped classes. The press release, referencing the Research Summary, refers to initial findings as emerging positive and suggests that the 9 tests showing no statistical increase should be read as positive.

Researchers note “improvement on the Hearing and Recording Sounds in Words (HRSIW) assessment, which measures a child’s level of phonemic awareness and ability to represent sounds with letters.”

This data suggests that there is a correlation between doing SOMETHING (providing iPads) is better than doing nothing (control group) for improving literacy scores. In this case, the ‘something’ is an expensive ongoing investment in hardware and technical support.

In his book “Too Simple to Fail: A Case for Educational Change

,” Dr. Bausell’s research and study analysis concludes that increasing relevant time-on-task is the only way to increase learning. Applying Bausell’s conclusion to Auburn’s study, what other ways of increasing time-on-task can be tested to determine if the benefits are iPad-specific?

For the other 9 assessments completed in this 9-week study, there was no statistical significance reported. My understanding of “statistical significance” is that any results recorded are different enough as to suggest they weren’t caused by chance. Justin Reich reviews the study results and offers his perspective on the conclusions in his article, Are iPads making a significant difference? Findings from Auburn Maine.

iPad distribution was randomized, and I believe that this study was conducted in such a way that the only difference between the test group and the control group was device presence. The positive results referenced by Auburn’s press release all trend positive, but at this time the data doesn’t see enough of a change to consider it definitive. What other uncontrolled variables might be present in the study?

What does it all mean?

Initial findings focus on literacy. If the iPad is to be an (r)evolutionary tool in education, subsequent Auburn studies should follow the positive trend lines and cause the iPad-using group of students to widen their achievement gap with the non-iPad group. It will be interesting to see the math data captured by Auburn and find out if similar gains are seen there.

Dr. Mike Muir (Auburn’s study lead) succinctly states a fact that researchers and district officials can likely agree on, “our study studied the impact of the iPad as we implemented them, which is to say, systemically, including professional development and other components.” I concur with Dr. Muir, and I’m sticking to my initial hypothesis from previous postings:

Ultimately, the ongoing success of an iPad deployment has very little to do with the iPad itself, and can be attributed to the concerted efforts from teachers, curriculum designers, IT support, administrators, parents and students. A common ground for all stakeholders is a position from which great things can happen.

As a classroom educator and 1-to-1 iPad manager, I can report that my students are engaged in more multi-media projects and are being challenged/assessed in more computer-centric ways than in the majority of non-1-to-1 learning environments I’ve witnessed. As a practitioner, I can also confirm that the instant-on feature of the iPad results in an average of 5-15 minutes of extra work time per period since there is no waiting for devices to fire up or log in. Multiply this by 3 classes a day and that is more than 75 minutes of extra time-on-task per week, or 45+ hours a year. I have to believe this time will have a positive impact on learning.

As someone interested in best classroom practice, research design and analysis, I have a few questions/concerns:

I’m cautious about the Auburn results but wish the best for Dr. Muir, his team, and the students.

After reading articles and watching screencasts about the iBook Author announcement today, I decided to spend 30 minutes to find out how easy the new authoring tool is to use.

I was excited to find out that you can freely distribute iBook Author creations beyond the iBookstore as long as you don’t charge for the content. This at least means that I can create classroom materials and sync, send, or download them to student devices. The downside of personal distribution is that when you update the book you will have to manually push the new version to all devices.  An iBookstore distribution allows the new content to push to iPads automatically.

This morning Apple released an e-textbook authoring tool & distribution system, and in a single announcement may have shifted many of the purchasing conversations that occur annually at educational institutions.

On first glance, this seems to be a rebrand of the iTunes U bookstore focused on schools of all levels – an evolution of existing technology, not a revolution. iBookstore already allows authors to distribute books. The ‘new’ e-textbooks appear to be ePub3, a standard that already is in production and has the potential to work on more than just an iPad. Apple’s iWork Pages application already has the ability to “Export as an ePub”, although the new authoring tool should have a more robust feature set. Furthermore, an ePub can already be opened in iBooks without going through the iBookstore distribution channel, via email. However, Apple’s marketing strategy, as always, is fascinating and potentially extremely effective:

This new authoring and distribution system for e-textbooks goes a long way towards providing students a more versatile classroom reference. However, it is still a one-way delivery system. As an educator, I can qualitatively estimate student engagement and use assessments to judge whether it has an impact on learning – this is certainly the hope outlined in Apple’s advertisement (embedded below).

As a content creator and possible e-textbook author, I’d really like this advancement to include two-way communication. I’d like to know which chapters students spend the most time with, where the most notes are taken, if there are sections that students skip, etc. There are already some social learning networks out there (I’m familiar with Better.At) that provide plan authors with feedback that allows for content adjustments based on data. Technology already allows us the ability to auto-collect and aggregate this data, and test scores are at least one step removed from the feedback cycle.

Critique aside, I’m excited to play around and see how I can use it in my own classrooms.

2 of this week’s news stories to start classroom conversations:

Obama says White House tech is 30 years behind – The White House technology is not the high-tech version we see in the movies. Is the US at a disadvantage because our leader doesn’t have access to giant touch screens or retina scanners?

Your iPhone is silently and constantly logging your location -iPhones automatically keep a log of all the location your phone goes, in an unencrypted format. Should consumers be warned before this feature is enabled? What other ways of tracking individuals already exist in our digital world?